Today, the UK’s Foreign Secretary use his first official visit to Moscow to promote the need for all nations to recognise the right of every nation to establish – and maintain - their own sovereignty. This bridge building exercise could start immediately with the establishment of a new Russian – Western Institute along the lines I first proposed to the Foreign Office in summer of 2016, immediately after the Brexit vote.

The relationship between ‘The West’ and Russia have never been smooth and in the past largely based on Western opportunism to suit ‘The West’s’ objectives and impose the solution - whether it be religious, political, economic or social - that suits ‘The West’. Both NATO and the European Union has been significantly weakened. China is challenging traditional US dominance in the East. In short ‘The West’ needs Russia more than Russia needs the West.

In addition, the Russian economy benefited from the devaluation of the rouble as the result of sanctions. I have been arguing for the past 2 years that, with help, I am sure the Russian economy could emerge from its worst recession in two decades. Today the ‘boot is very much on the other foot’. In 2016 I argued, ‘the West needs Russia and its political, strategic and administrative model to help restore world, especially Middle East order and global security’. How true – today Syria is now ‘sans’ ISIS!

This need of ‘The West’ for Russia was first admitted by Downing Street in Summer 2016 by Prime Minister May’s initiated call to President Putin “The Prime Minister and President agreed that British and Russian citizens faced common threats from terrorism”.

Such an initiative could present ‘The West’ and Russia with the platform to establish Russia as a fully paid-up member of the world political, social, financial and economic club. It would also be a recognition by ‘The West’ of Russia’s right to not just exist but develop as a sovereign nation in its own right under its own rules.

As President trump said earlier this week, the same principle of sovereignty should also apply to every nation. But sovereignty must be both dynamic and sustainable. This necessitates each nation developing its own economic and financial sustainable model that suits its own nation. This is not about imposing a ‘one model fits all’ Globalisation version of capitalism but about using different versions of the wide-ranging capitalist model to develop alternative economic solutions that differs according to each nation’s requirements and objectives.

It is first about each nation deciding on its own version of capitalism and their own rules, regulation and structure for administering what suits them. Secondly it about how each independent national model interacts with every other sovereign nation model. It is about interdependence of nations not about the domination of one formula on another.

The same applies principle should apply to every African, Asian or South American nation. In the case of Russia, it about the development of its own financial system in much the same way China has developed social capitalism and Muslims ‘Sharia Finance’.  Perhaps it could be called “Democratic Capitalism”?

My proposal is to set up an organisation to discuss the Russian way of doing business and how best it will integrate with the West’s based capitalist system. Then ‘The West’ can embrace an economic model as an integral part of the adoption of the Russian political and social model for managing a secular state/nation that incorporates many different religions, culture and histories. Each independent sovereign nation has an interdependent relationship based on Bi-Lateral trade deal that is tailored to each party’s needs.

For Russia, the need and importance of Russia having its own bespoke strategic politic, social and economic solution was recognised over hundred years ago by Sir Halford John Mackinder, one of the founders of London School of Economics and of geo-politics. In 1904 he gave a paper on "The Geographical Pivot of History" at the Royal Geographical Society, in which he formulated The Heartland Theory that “The Heartland lay at the centre of the world island, stretching from the Volga to the Yangtze and from the Himalayas to the Arctic” He maintained that whoever “rules East Europe commands the Heartland  - who rules the Heartland commands the World-Island and who commands the World-Island commands the world”.

Russia has massive natural resources yet a relatively small suitable workforce and a lack of available capital to enable Russia to exploit these assets domestically by developing extraction and processing industries. Today many countries export unrefined oil, gas, minerals and timber, price to market is the only differentiator.

We also know that 90% of all case those who migrate are motivated by economic need.  This is another form of exporting ‘raw materials’ and deprives the country of origin whilst benefiting – or sometimes causing a burden – on developed nations. It would make so much more sense to set up an organization to ensure that each nation has a sustainable economic model that fits each nation’s own cultural and resource profile.

For example, if Russia processed its own natural resources domestically, manufactured key products using these natural resources to supply the world’s industries supply chains then Russia’s economy would benefit significantly and its economic position would be strategically stronger.

Not only Russian wealth would be significantly greater but Western and Eastern markets would become dependent on its exports.

The same principle should apply to the former parts of the USSR that now border Russia. The world must recognize that the current ‘default’ model that destroyed

Georgia and then Ukraine must not be perpetuated in other countries, especially Moldova. Every power should recognize the right of each of these country’s to be sovereign. This means ‘unaligned’, neither under the domination or influence of either the ‘The West’ nor Russia nor China. The only way is for each sovereign nation to develop their own version of capitalism so they can become a sustainable economic entity co-existing and inter-dependent.

So instead of NATO and Russia wasting billions of dollars, rubles or euros on defense, it would much more sense diverting these financial resources to develop the supply chain within each of these nations to help them become self-sufficient and sovereign. By way of example, I was recently discussion this matter with President Dodon of Moldova, who wants to growth his economy by looking West as well as East. Moldova is according the statistics the poorest country in Europe. I accept this is the case in terms of GDP per head of population but I do not accept this in the case of their own ‘raw material’ – the very fertile and unpolluted black earth land, its people or its culture. Russians have long understood the high quality of their wine but they need help in marketing their wonderful asset and in developing their land for the benefit of all Moldavians. Then countries like Moldova become a peaceful solution to East-West tension and aggression instead of a problem where each is exercising varying degrees of muscle.

Russia needs to be a key part of the decision for countries like Moldova to be sovereign and sustainable economically. So ‘The West’ – led by the UK - should offer to work with President Putin and his team to help Russia fulfil its own objectives in harmony and in co-operation.

The question is how, given present conditions within Russia, can Russia fulfil this objective?

In the case of Russia, it about ‘The West’ first understanding the form of capitalism and associated economic and financial model that suits Russia and is wanted by Russia. Secondly how this Russian model could best have an interdependent relationship.

Issues to be addressed by the Institute

Russia has massive natural resources, yet there is a relatively small suitable workforce, and a shortage of available capital to enable Russia to exploit these assets domestically by developing extraction and processing industries. Today many countries export unrefined oil, gas, minerals and timber, with cost of extraction and geographical location (price to market) being the only differentiators.

If Russia were to process its own natural resources domestically, then the value added from processing or manufacturing would remove the heavy exposure to raw commodity prices. Key products could be targeted that would feed strategic, integrated supply chains. Russia’s economic position would be strategically stronger, and its economy would benefit significantly.

The question is how, given present conditions in Russia, can Russia fulfill this objective?

One possibility for a recommendation could be for Russian manufacturing to rapidly adopt robots to drive production efficiency in higher value added manufacturing. Automation has many benefits, not least production is controlled by a few, and the workers do not need paying, training or educating.
Costs and quality are definable and controllable. While Russia can immediately roll-out such production processes without impacting existing labour markets, other economies would have to contend with the impact on the existing workforce and sunk investment.

This model for a Russian supply chain and financial model would dynamically integrate with global manufacturing and finance, rather like the cogs in a machine working together. It would still operate largely according to its own parameters and rules. Each would work independently but they are interdependent. 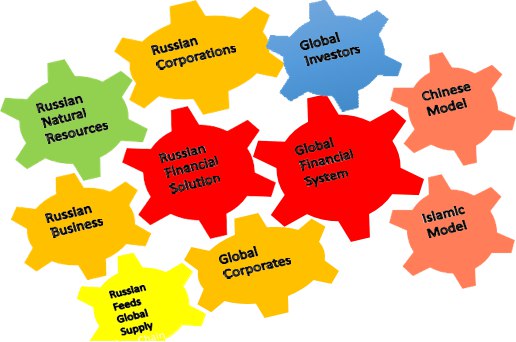 The key aspect is that the proposed Russian supply chain and financial model would dynamically integrate with global manufacturing and finance rather like the cogs on a non-digital watch work to together in an independent manner. Each would work independently but for optimal benefit are interdependent.

The strategic analysis could centre around Russian manufacturing becoming the largest users of robots to drive production and its domestic value-added supply chain. Automation has many benefits, not least production is controlled by a few and the ‘workers’ do not need feeding, training or educating. `Costs and quality are

definable and controllable. Whilst Russia can immediately roll-out such a production process the established economies have to contend with changing existing processes and convincing its existing human workforce to adapt and adopt.

The financial proposal is to establish a Russian Financial Model that integrates and is accepted by western financiers and investors who will then have the confidence to provide the necessary capital whilst global business sees Russian exports as a way of obtaining high quality, well priced components to their own supply chain.

The company structure would be modelled on Gazprom, a combination of Russian state ownership/control, oligarch and other strategic shareholdings plus outside investors through ADRs (American depositary receipt is a negotiable security that represents securities of a non-U.S. company that trades in the U.S. financial markets) and internationally trade debt and equity.

The structural proposal is to establish a Russian – Western Institute to first explore, then identify, then agree and then plan its implementation. It would be set up by the Russian State but then financed through sponsorship for western and eastern companies and organisations who wish to be part of the Russian solution.

So President Putin and Mr Foreign Secretary, please using these next few days to pick up on my August 2016 suggestion expanded above and start the ball rolling as a New 2018 Year resolution. I – and others - are ready to assist in ‘Doing Business Together’.

Economics
Chris Poll: Small and Medium Enterprise is...
Chris Poll , Theodore Roosevelt Malloch
18.12.2017
International Conference: «Financial Capitalism and its Alternatives for the 21th Century: Contributions on the 4th...
You are reporting a typo in the following text: Simply click the "Send typo report" button to complete the report. You can also include a comment.