The Deadly duo: KANYON and KHABAROVSK
The recent leaking of the Status-6 (‘KANYON’) strategic nuclear torpedo has been met by many in the West with incredulity. It is true that the leak may have been orchestrated, and the statistics on the leaked document may be exaggerated either way. But the fact remains that the weapon was not unexpected among the few observers watching the development of certain large submarines by Russia. We knew that Russia was developing an over-sized forward firing weapon because of the Sarov submarine. And the project 09851 and Project 09852 were being followed and talked of as probable launch platforms for the new weapon. There are many details of the system which remain unanswered, and the rationale behind the weapon can be debated ad-infinitum. But is it a real project? Yes it is. These submarines are real and they are far too expensive to play such a ruse. Now we can examine the weapon and the KHABAROVSK submarine.

The Status-6 (Статус-6), aka KANYON, has been described as an unmanned midget submarine, but it is better thought of as a massively-large nuclear powered and nuclear armed torpedo. It is ginormous: 1.6m (5.5ft) in diameter and about 24m (79ft) long. To put that into perspective, it is about 27 times the volume of a regular 533mm (21”) heavyweight torpedo.

The weapon is designed to strike coastal cities and strategic targets, e.g. New York, Boston, Los Angeles, San Francisco and bases like Groton CT and San Diego. The warhead is reported as a 100 megatons (which may be much too high!) nuclear device with a ‘dirty’ Cobalt shell in order to maximize the radioactive fallout. The payload is similar to the warheads used in ICBMs (Inter-continental Ballistic Missile) but only one is carried on the torpedo. It could therefore be compared to a city being hit by a single MIRV (Multiple Independent Reentry Vehicle) except that it explodes under the water. The effect is likely to be much more localized than an air-burst, but with greater local contamination spread by a radioactive ‘rain’. The explosion itself may be some way out of the target city due to geography and obstacle defenses but a shoreline city like New York would wiped out by a single hit. Performance variables:

Depth: The stated running depth of 1,000m is credible and places it below current countermeasures. The problem of building torpedoes and/or depth charges to hit it are not insurmountable but will take investment and renewed focus.

Speed: The claimed speed of 100 knots (185 kph) is incredibly fast for a torpedo. The leaked cutaway drawing shows that there is a nuclear reactor coupled with a steam turbine driving a propeller shaft so we know that it is not a rocket type weapon. At these speeds there would be vibration and stability problems for the designers to overcome. For the moment 100kt seems too fast but we will have to wait and see if the specifications become more realistic.

Range: The leaked document claims that the weapon can be launched from as far as 10,000 km (5,400 nm) away. Given its nuclear powerplant this seems credible. Even at an incredible 100kt, it would take 4 days to reach its target at maximum reach. Operationally we would expect ranges to be far shorter, but still undoubtedly an extremely long ranged weapon. It also seems likely that some of the distance would be accomplished under ice adding additional complexity both to navigation and to NATO countermeasures.

Health warning: The speed parameter seems unrealistic and the range is not operationally necessary. To put it nicely, most people exaggerate their projects to their bosses. I’d wager that they are lying to Putin and themselves as much as to the West. This does not mean that the project is not (at his stage) real.

The lack of shielding also means that the reactors cannot be test-run while inside the launch tube. Maintenance is thus much harder than on the ICBMs carried in other strategic submarines, and the weapons are essentially sealed containers.

KHABAROVSK submarine
The main launching platform of KANYON is likely to be the new Project 09851 'KHABAROVSK' (пр.09851 "Калитка-СМП" "Хабаровск") submarine. This boat is similar to but smaller than the Project 955 'BOREI' (пр.955 "Борей" - BOREI) SSBN with was as designed by the famous Rubin design bureau. Certain design features allow us to estimate the dimensions of the boat (see specs below). Working off a similar hull diameter to the BOERI we can estimate the submarine's length as 120m versus 160m for the BOREI. This makes sense as the KHABAROVSK does not require the missile section behind the sail. And it is even possible that it shares many components and even hull sections with the SSBN. The stated displacement of 10,000 tons makes it massive, but is much lighter than the 13,000 ton BOREI.
The leaked graphic strongly hints toward the KHABAROVSK having two side-by-side hulls in the bow. This is a highly unusual arrangement but is actually not dissimilar to the Project 20120 SAROV submarine used to test the Status-6. The basic reason behind this arrangement is that the torpedoes have to fire forward, and are carried externally to the occupied pressure hulls. Therefore a stack of six massive torpedo tubes occupied the space where the forward pressure hull would ordinarily be, thus shifting occupied space into smaller hulls either side.
The regular 533mm (21”) and/or 650mm (25.5”) torpedo are most likely carried in the flank hulls although the question remains as to how they are reloaded. Alternatively they may be carried further aft in flank tubes angled outward to avoid the bulbous bow.
Project 09851 submarine specification
Displacement: 10,000 tons surfaced
Length: 120m (estimate, see analysis)
Diameter: 13m main hull, 16m across forward section (estimates, see analysis)
Speed: TBC but almost certainly over 20kt
Endurance: Unlimited. At least 60 days supplies
Maximum Operating depth: TBC - likely 400-500m
Crew: TBC
Powerplant: 1 x nuclear reactor (probably ОК-650В) driving a single pumpjet.
Armament: 6 x Status-6 nuclear torpedoes. Unspecified capability to launch regular torpedoes and decoys. 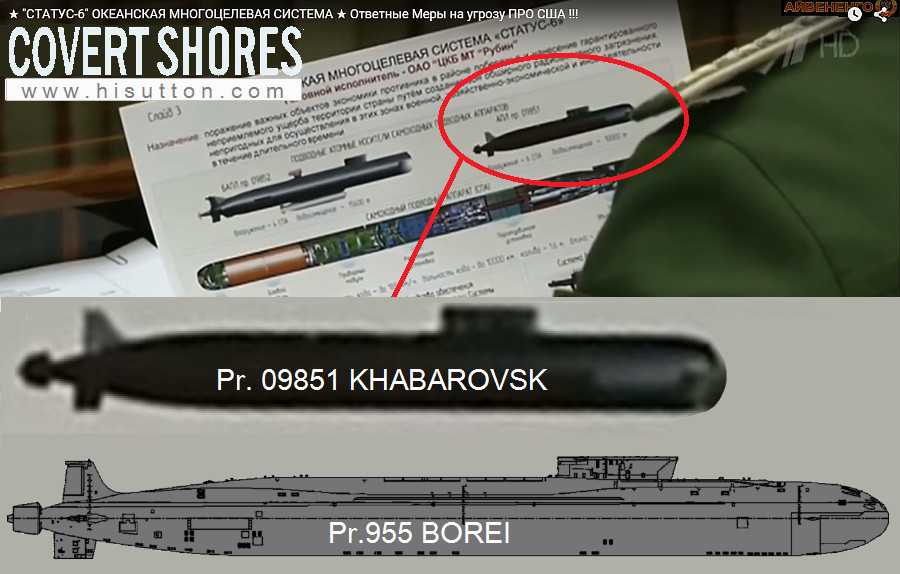 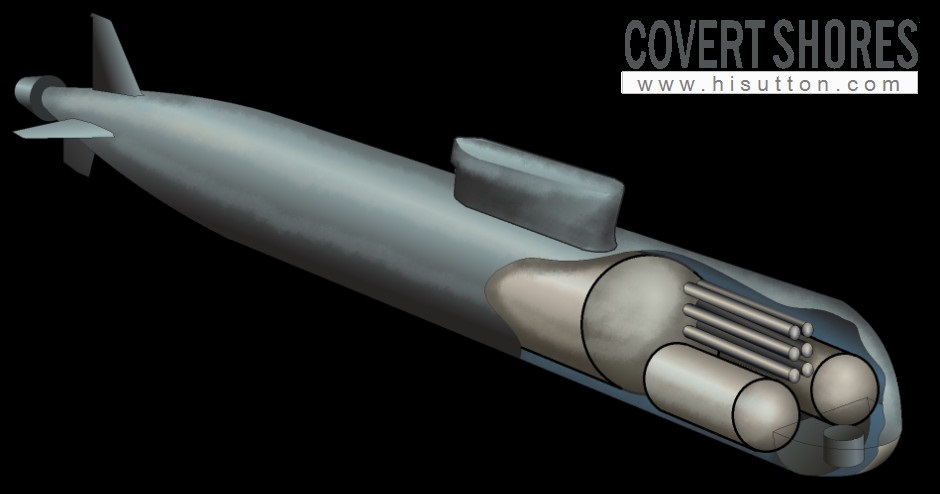 Geopolitics
France's exit from NATO?
Germán Gorráiz López
20.09.2021
In the event of being reelected President in the presidential elections in spring 2022, Macron will try to catalyze the chauvinism of the French by...
Françafrique: the collapse of colonialism
Katehon.com
12.09.2021
Year after year, France suffers defeat in African regions. While still considering itself the rightful master of the continent, Paris cannot accept...
Geopolitics
The ANZUS Security Treaty At 70
Leonid Savin
02.09.2021
The regional security agreement between the US, Australia and New Zealand continues to be an important treaty in regional geopolitics. It was...
You are reporting a typo in the following text: Simply click the "Send typo report" button to complete the report. You can also include a comment.