France on the eve of the elections

The 1st round of the elections will have place the 23d of April. The leaders of the presidential race are: antiglobalist Marine Le Pen and globalist Emmanuel Macron (according to IFOP and OpinionWay polls).

The battle of the populist forces against unipolar elites

This fight is historical, because there is the possibility that nobody from the classical political parties will be in the 2nd tour (neither republican, nor socialist candidate). That means that the political space of Europe transforms itself into the battle of the populist forces against unipolar elites.

This phenomenon is called by certain philosophers (such as Chantal Mouffe or Alain de Benoist) the ‘populist moment’. It means that people is starting to realize that it is being deprived of the political life. This abandon provoques a reaction of revolt. People demands the political power to take in account its will. The only candidate in this elections, who stands on the side of the French people’s interests is the leader of the “National Front” Marine Le Pen.

Marine Le Pen as an actor of ‘populist moment’

Her main political aim is to give back the voice and power to people. She declares that the slavery of France must be ended: the priority of the EU must be thrown away and France must leave it.  That will give France an opportunity to reconquest its sovereignty in 4 spheres: economical, territorial, juridical and monetary.

In the domain of International Relations she can be judged as the classical realist: the sovereignty of France is the highest value, the main line in the international politics must be dictated by the real interests of the country ( in this sphere Russia becomes a partner as a essential garant of the multipolar world, the USA with its neo-conservative course and liberalism in the International Relations is comsidered rather an enemy to France and a threat to its political independence).

Macron as a defender of the liberal world order

According to the polls (IFOP and OpinionWay), Macron will overcome Le Pen in the 2nd tour of the elections. The 39-old politician is the classical representative of the ultraliberal ideology. Declaring himself as somebody, who isn’t left-wing or right-wing, Macron unites in his program the liberal left political ideas and liberal right capitalism. This is a mix, which is totally opposite to the political program of  Marine Le Pen (from 2011 she is trying to mix the right politics with left economy).
Macron is a child of the french globalist Swamp, represented today by socialist party, president Hollande and the promoters of globalism such as Jacques Attali, the creator of the theory of the nomadic elite’s world-state.

The leader of the movement “En Marche” is artificially constructed by the media-sphere, controlled by the liberal left government ( some users of facebook started to name the BFM TV as the BFMacron TV – the similar was with CNN, which was doing a disastorous propaganda for Clinton and was called by alt-right partisans as the Clinton News Network). In the International Relations Macron is the classical liberal, who defends the EU as a step to create the unipolar One World without the identities. Macron's (in)famous phrase is now widely dicussed ‘There is no french culture, there is a culture in France ’. Some people thinks it is rather insult of Frenchmen.

Comparing Marine Le Pen and Macron, we can say that Marine Le Pen represents the new force of the French people and her opponent is the continuation of the old liberal left course, with final goal -- to construct the unipolar and globalist world order.

The system is against Le Pen and for Macron

2 weeks before the 1 st tour of the president elections the radical anti-fascist activists and left extremists from Soros-financed movements have launched a hashtag #NuitdeBarricades – the barricade's night. This is an appeal to a huge demonstration and some kind of Maidan in the center of Paris (place de la Bastille) after the first round of the president elections, where Marine Le Pen will probably win.  There is a possible wave of huge anti-Le Pen protests in the suburbs of big French cities (especially in Paris) , which was prepared for several weeks. 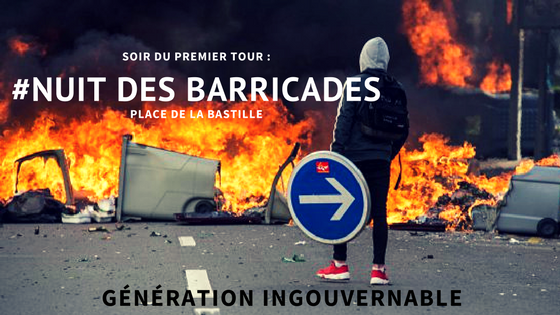 The system is not interested in the victory of the leader, who represents the interests of people and is not involved in the liberal agenda. In the case of the victory of Marine Le Pen in the 2nd tour (the 7th may) the results of the elections can be annulated by the government: it can be done on the base on the 16th article of the french constitution, which describes the urgent situation in the country. The other candidate F.Fillon that has too small chances to win has already voiced the appeal to cancel elections in front of possible terrorist alert.

Geopolitics
Grey Zone: a theoretical concept and strategic tool of...
Leonid Savin
29.11.2021
Along with the concept of hybrid warfare, which we have already discussed in the previous report[i], the term "grey zone" (GZ) is actively used in...
Netwars
The concept of hybrid warfare: origins, application,...
Leonid Savin
19.11.2021
In recent years, the conceptual framework in the field of modern conflicts has undergone significant changes. New concepts and doctrines are emerging...
Netwars
The US Intelligence Community Sets Out Its Priorities
Leonid Savin
19.10.2021
On Thursday, 30 September 2021, the US House of Representatives Intelligence Committee approved the fiscal year 2022 budget for intelligence and...

Politics
The anatomy of populism and the challenge of the Matrix
Alexander Dugin
03.12.2018
The protests in France, symbolized by yellow vests, cover an increasingly large part of society. Political experts have already called this movement...

Terrorist attack in Nice: a blow to continental Europe
geopolitica.ru
15.07.2016
A truck drove into a crowd of people who were celebrating Bastille Day on the Promenade des Anglais in Nice. 84+ people were killed in a suicide...

France: The National Front experiences considerable growth
geopolitica.ru
After the November terrorist attacks in Paris, support for right-wing National Front (FN), with its anti-immigration policy, is growing rapidly. Amid...

Society
Mai 68
Alain de Benoist
14.05.2018
The expression “Mai 68” covers two distinct phenomena. The one that remains in our memories the most is of course the student revolt, but too often...

Did the assistant buy cocaine for Maсron?
geopolitica.ru
06.05.2017
Rumors about the predilection of Emmanuel Macron to drugs seem to be confirmed. The hacked correspondence of Makron's campaign headquarters contains...

Science and education
80 years ago: Fall of France, the Wehrmacht's advance...
Shane Quinn
14.08.2020
Eight decades ago in the late summer of 1940 the Wehrmacht's generals, at Adolf Hitler's behest, were beginning preparations for a massive invasion...

Politics
Dugin: In France the battle is lost, the war is not
geopolitica.ru
07.05.2017
Alexander Dugin about the results of the 2nd round of the presidential elections in France:

Georgia: military leadership resigns
geopolitica.ru
17.11.2016
Chief of Staff of the GAF Giorgi Tsabadze and Commander of Georgian Air Forces Sergo Ninua have resigned because of the outbreak of the information...

Politics
Sarkozy's crocodile tears (and his last dream is...
Eugenia Fiore Bennati
28.03.2018
Nicolas Sarkozy, a political bulimic, as Libération called him. And he remained even after political defeats and judicial processes. It was also in...
You are reporting a typo in the following text: Simply click the "Send typo report" button to complete the report. You can also include a comment.