New tensions between Hungary and Ukraine; the Hungarian minority threatened

Ukraine – A threat to expel the Hungarian Consul of Berehove (Ukraine), and new diplomatic tensions between Budapest and Kiev. Visegrad Post.

Diplomatic tensions have been rising between Budapest and Kiev since September 2017, when the Ukrainian authorities decided to reform the educational system with the aim of eliminating the languages of all the minority populations in the country (primarily Russian, but also Polish, Romanian, Hungarian, and Bulgarian).

This led Hungary to veto Ukraine in a NATO-Ukraine summit in order to protest the consequences of the new educational law regarding the Hungarian ethnic minority residing in Transcarpathia. The arson attack committed in February 2018 against the Hungarian cultural center in Uzhhorod (in Hungarian, Ungvár) also reanimated these tensions.

On September 21, 2018, the Ukrainian Minister of Foreign Affairs, Mr. Pavlo Klimkin, declared that Ukraine was ready to expel the Hungarian Consul in Berehove (in Hungarian, Beregszász) if Budapest wouldn’t recall him.

This proclamation resulted from a video in which some of Ukraine’s ethnic Hungarians were taking part in a short ceremony during which they received Hungarian citizenship. At the end of this video, someone can be heard saying that they shouldn’t use their Hungarian passports at the Ukrainian border, but only the Ukrainian one.

Indeed, in principle, Ukraine does not recognize dual citizenship, and it’s better not to mention it to the Ukrainian authorities if one has received one, as there is a risk of losing one’s Ukrainian citizenship. The enforcement of this rule seems quite flexible, however, since it’s common knowledge that the oligarch and former Governor of Dnipro/Dnipropetrovsk, Ihor Kolomoysky, holds three citizenships, to cite but one example.

In 2010, when Viktor Orbán and Fidesz returned to power in Hungary, the Hungarian authorities initiated a reintegration policy for the numerous Hungarian minorities living in the regions surrounding Hungary, which are the consequence of the new Hungarian borders decreed by the Trianon Treaty in the aftermath of the First World War. This is how more than one million people, mainly from Romania and Serbia, received Hungarian citizenship between 2010 and 2017. Only the ethnic Hungarians from Slovakia were left out of this process as the result of an emergency law passed by the Slovakian parliament which mandated that Slovakian citizens would lose their citizenship should they take that of any other nation as well.

In the case of Ukraine, despite the de jure prohibition of dual citizenship, it seems likely that the authorities have decided to exercise tolerance, considering that these have been in greater demand given that the quality of life has significantly decreased since the 2013/14 crisis. Ukraine’s Hungarian community was estimated to number at approximately 150,000 in 2001, but has fallen since then, with an estimated 1,500 citizens leaving each year since then – particularly young people.

Another cause for concern for the Hungarian authorities has been a list that was posted online by a Ukrainian nationalist website (Myrotvorets, which means “peacemaker”) consisting of the names and addresses of Hungarian ethnic minority’s local councilors in Transcarpathia who are said to be holding dual citizenship with Hungary.

According to the news site Karpatinfo, in the cases of others whose addresses were published on this site – as for example the former MP Oleg Kalashnikov, and the journalist Oles Buzina – some of them were murdered within a few days. Even more troubling is the fact that, in 2016, Ukrainian President Petro Poroshenko admitted that he has limited control over this Website. 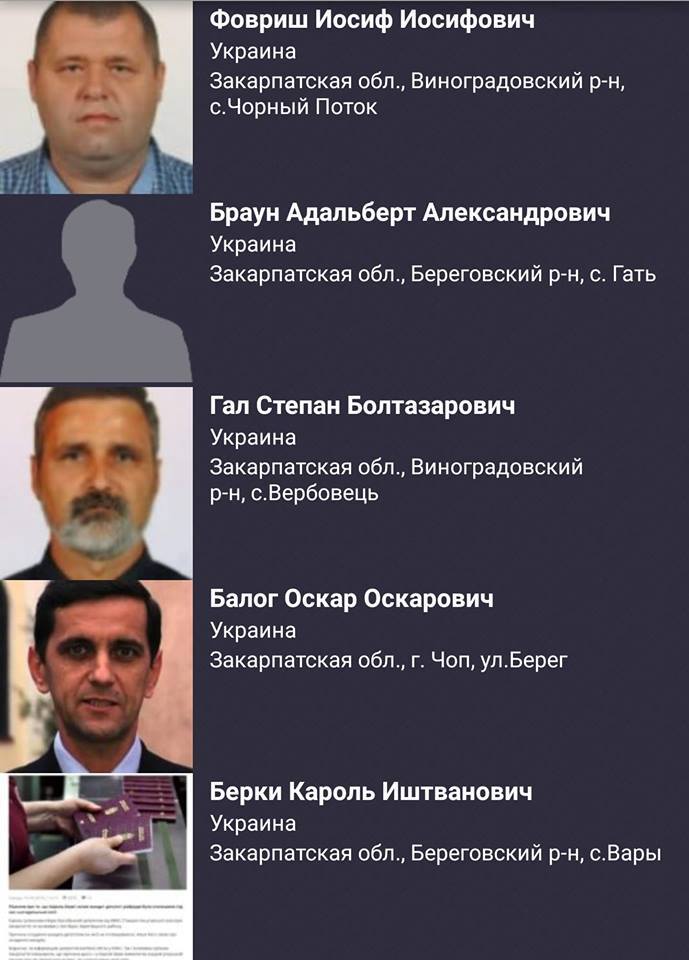 Moreover, in Transcarpathia, groups such as the Karpatska Sich, whose name is derived from an armed Ukrainian nationalist group which operated in the region during the late 1930s, have organized demonstrations in recent years in which hostile and threatening slogans targeting the Hungarian minority were utilized.

Péter Szijjártó, the Hungarian Minister of Foreign Affairs, declared that the expelling of the Hungarian Consul in Berehove would not go unanswered by Hungary. Their primary retaliatory measure would be to block Ukraine’s attempts to join both NATO and the EU (as Hungary holds memberships in both), as Ukraine desires.

Szijjártó also claimed that these attacks are taking place because of the Ukrainian presidential election set to take place in March 2019, and said that he would soon meet his Ukrainian counterpart during a United Nations session.

Prior to the Ukrainian educational law that was passed in September 2017, Budapest was working towards good relations with the new administration in Kiev. Following the chaotic decade of the 2000s, when the liberal Left was in power in Hungary, the current government has developed a diplomatic strategy aimed at ensuring that Hungarian minorities in their neighboring countries are not a source a conflict, but rather a bridge towards good relations, in a logic of “win-win” consisting of negotiations and common interests.

Therefore, during his annual speech at the Fidesz summer camp at Tusványos in 2016 (in which he was the first head of government to speak of his hopes for Donald Trump’s victory), Prime Minister Viktor Orbán explained that Hungary was investing in Transcarpathia and supported the idea of Ukrainian citizens being able to travel to the European Union without a visa (Hungary and the other V4 countries supported this). And indeed, the visa requirement for Ukrainian citizens on short-term visits to the the EU was dropped in 2017.

Two years later, Viktor Orbán was less flattering about the situation in Ukraine: “I don’t envisage their membership in NATO, and the prospects for their EU membership are virtually zero. So at this point in time, instead of a new Ukrainian state, I see a Ukrainian economy increasingly drifting towards debt slavery.”

Meanwhile, the new educational law has led to a deterioration of relations between Kiev and Budapest, as well as with both Warsaw and Bucharest.

Society
Tibor Imre Baranyi: Who is the Enemy of Hungarian...
Sofia Metelkina
06.08.2018
The following is an interview with the Hungarian philosopher and theologian, Dr. Tibor Imre Baranyi, about the ideas of...

Security and conflicts
The new confrontation between Russia and Ukraine
Lorenzo Vita
17.09.2018
The crisis between Ukraine and Russia is enriched by a new war front: the Sea of Azov. In recent weeks, the body of...

Politics
Istvan Lovas: In Hungary the media are much freer...
Sofia Metelkina
08.04.2018
Interview with Hungarian journalist Istvan Lovas (January 2018) - Do you believe in «independent journalism» today? -...

Politics
György Schöpflin: Illiberalism of Orban, modern...
Sofia Metelkina
13.03.2018
Interview of Geopolitica.ru with Hungarian politician and Member of the European Parliament from Hungary, member of...

Security and conflicts
Ukraine accused for missile success of DPRK
New York Times writes that "North Korea’s success in testing an intercontinental ballistic missile that appears able to reach the United States was...

Society
Tibor Imre Baranyi: Who is the Enemy of Hungarian Identity?
Sofia Metelkina
06.08.2018
The following is an interview with the Hungarian philosopher and theologian, Dr. Tibor Imre Baranyi, about the ideas of the Traditionalist René...

Politics
Hungary – How the Formerly Eurasianist Jobbik Became a...
geopolitica.ru
14.10.2019
Besides its Prime Minister, Viktor Orbán, who has become world-famous since his reelection in 2010, Hungary’s political scene has featured one other...

Society
László Toroczkai: We can save Europe from migrants –...
Sofia Metelkina
02.03.2018
The story of the mayor of one Hungarian town that proved that Europe can be protected from migrants. For many parts of, Europe the immigrant...

EU rescues the University of Soros
geopolitica.ru
27.04.2017
The European Union stated that it had started an legal action against Hungary. The reason was the introduction of amendments to the law on education...

Largest refugee camp closed in Hungary
geopolitica.ru
09.12.2016
Hungarian authorities have closed the country's largest refugee camp, located near Budapest almost a month ahead then it was scheduled. Only 60...

Luxembourg proposes to kick Hungary out of EU
geopolitica.ru
13.09.2016
Such a demand was voiced by Minister of Foreign Affairs of Luxembourg Jean Asselborn.

Politics
György Schöpflin: Illiberalism of Orban, modern Hungary and...
Sofia Metelkina
13.03.2018
Interview of Geopolitica.ru with Hungarian politician and Member of the European Parliament from Hungary, member of Fidesz György Schöpflin. In your...

Geopolitics
Zoltán Kiszelly: Hungary can win the political battle with...
Sofia Metelkina
29.04.2018
Interview with political scientist Zoltán Kiszelly - I would like to talk about the geopolitics, about the future of Hungary. What people think about...
You are reporting a typo in the following text: Simply click the "Send typo report" button to complete the report. You can also include a comment.