The official reason for the protests in France is the price hike on gasoline and diesel fuel. Over the past year, prices have already increased by 15%, with one liter of gasoline in France now costing, in terms of Russian money, more than 110 rubles (just under two dollars). The movement has rather quickly surged from slogans against price hikes, tax raises and the unemployment rate (currently at 10% in France), to slogans calling for the president to resign (Macron démission!). One of the leaders of the “Yellow Vests”, Christophe Chalençon, has declared that General Pierre De Villiers, should become Prime Minister. General De Villiers, let us recall, is the former Chief of Staff of the French Army, an anti-globalist who resigned after entering into conflict with Macron over opposing defense budget cuts.

Besides raising gas prices, Macron is also pursuing a harsh economic policy from which the population has suffered greatly. In August 2017, Macron began developing a reform plan for the French labour law, whose official aim was to make the labour market more flexible, but which, in the opinion of trade unions, would lead to instability on the labor market and would not resolve very real unemployment problems. In September 2017, strikes against these reforms were supported by as many as 57% of French people. Prior to his presidency, Macron lobbied the El Khomri law which sought to reform labor legislation by introducing a simplified dismissal procedure and reducing social pay-outs and benefits for workers. More than 400,000 people took to the streets against this law in 2016. However, these protests did not lead to any amendments or cancellation of the reform legislation. The voice of the people was not heard. But the Yellow Vests remember. The Yellow Vests remember everything.

On November 17th, 2018, more than 100,000 people burst out onto French streets. The spontaneously-formed Yellow Vests movement thus acted out against Macron’s liberal economic course. The protests have since become regular. The Yellow Vests have covered all of France.

On December 1st, Yellow Vest demonstrations escalated into rough clashes with the police, who tried to disperse the protests with tear gas, water cannons, and rubber bullets. The Yellow Vests have built barricades out of whatever they can find - fencing, Christmas trees, and road signs. More than 400 people have been arrested, and more than 130 wounded. On December 3rd, the Yellow Vests blockaded the Total corporation, thus preventing gas supplies to reach stations.

The government and Macron vs. the Yellow Vests

The government is seriously worried. Macron’s party has criticized the demonstrators and tried to label them extremists and provocateurs. All the while, French authorities have not ruled out imposing a state of emergency. President Macron himself has held emergency meetings on the protests, and the government has imposed a moratorium on the gas price hikes. The leader of the National Rally, Marine Le Pen, as well as the head of the Unbowed France movement, Jean-Luc Mélenchon, have called for early elections.
According to the latest surveys by Harris Interactive, 71% of the French population supports the protest movements. In other words, 71% are with the Yellow Vests. Macron’s rating, meanwhile, is at 26%, which brings him close to the 21% of his predecessor, François Hollande. 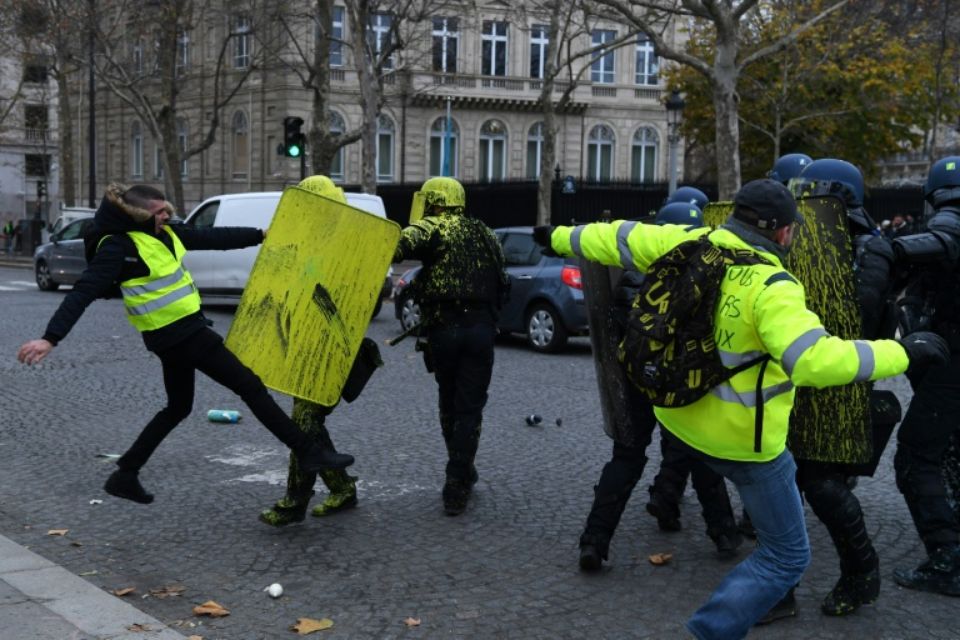 Beyond left and right

One intriguing peculiarity of these protests is that they have not been organized by some political force or block of left or right, nor by trade unions (as the 2016 protests were), but completely spontaneously, without a political party behind them. The protests have been coordinated across social networks, and many of the protestors’ vests bear the slogan Ni gauche, ni droite (“Neither left nor right”). The people has taken to the streets - without political labels and categories, and without parties and membership cards. Rising prices, toughening legislation against workers, and dissatisfaction with the current government’s economic policy are but the pretexts, the spark that ignited widespread discontent into the enormous bonfire of a new people’s revolution.

Macron has condemned the demonstrations, and called the protesters “extremists.” The official mass media are talking about the brutality of protesters and cases of damage to city property (measured in gigantic figures), but are for some reason silent over the harsh police measures and arrests. It is as if the world has been divided into Yellow Vests and their enemies. Whoever is not with them, is against them. There’s only them and their enemies.

Today, Paris is the Yellow Vests, everyone who disagrees with Macron’s political course, everyone who feels deceived. These are the “deplorables”, those whom the system has cast outside of the limits of the political. This is the people, thrown out of political programs, the subject of the real Europe.

The last large-scale protests of the Yellow Vests on December 1st symbolically took place on the Champs-Elysées. We can recall from Ancient Greek mythology that the Elysian Fields were the resting place of the righteous. In these blessed forests, according to legend, lurk the shadows of soldiers wounded fighting for the Fatherland. Today, the showdown between the Yellow Vests and Macron & co. is a supra-political conflict. It is the people’s battle against the elites, a battle between the blessed and Hades. This is the populist moment. And it shows that les choses ne vont pas si bien (“Things are not going so well”). Something is wrong with this system, and its end is near…

Political philosophy
Alain de Benoist: Macron was underestimated by...
Alain de Benoist
16.06.2017
For the last few weeks, political events have followed each other in France, and the principal event among them remains...

Politics
Macron's rule: France: After his new victory, Macron set for authoritarian rule and social counter-reforms
Judging by the first results of the French Parliamentary elections abstention, especially by the French popular classes and young people, was the big...

Political instability in France
The 1st  round of presidential elections showed out that the classical parties (socialists and the republicans) were thrown out of the real political...

The Truth about Macron (Infowars)

Politics
The anatomy of populism and the challenge of the Matrix
Alexander Dugin
03.12.2018
The protests in France, symbolized by yellow vests, cover an increasingly large part of society. Political experts have already called this movement...

Political philosophy
Populism Rejuvenated: “Woke” Millennials
Friedrich Hansen
10.04.2018
The recent Western plunge into narratives of malicious poisonings, be it in Salisbury or in Syria, reflect political infantilism and a fundamental...

Geopolitics
The People’s Uprising: 'Yellow Jacket' case
Daria Platonova
05.12.2018
The official reason for the protests in France is the price hike on gasoline and diesel fuel. Over the past year, prices have already increased by 15...

Society
Mai 68
Alain de Benoist
14.05.2018
The expression “Mai 68” covers two distinct phenomena. The one that remains in our memories the most is of course the student revolt, but too often...

Science and education
80 years ago: Fall of France, the Wehrmacht's advance...
Shane Quinn
14.08.2020
Eight decades ago in the late summer of 1940 the Wehrmacht's generals, at Adolf Hitler's behest, were beginning preparations for a massive invasion...

Politics
Alain de Benoist: Macron is an algorithm
Alain de Benoist
02.05.2017
What lessons can you draw from the first round of the presidential election? What differentiates it from all those that preceded it?

Society
The hypocrisy of France: now it is crying, but in the...
Hanieh Tarkian
31.10.2020
After having favored a globalized and mondialist society, in which no more space is left for religious and cultural identities, favored the culture...

Politics
France: globalism VS patriotism
Daria Dugina
24.04.2017
The globalist Emmanuel Macron has won in the 1st round of the presidential elections in France ( 23.75%). The leader of the “National Front”  Marine...

Georgia: military leadership resigns
geopolitica.ru
17.11.2016
Chief of Staff of the GAF Giorgi Tsabadze and Commander of Georgian Air Forces Sergo Ninua have resigned because of the outbreak of the information...
You are reporting a typo in the following text: Simply click the "Send typo report" button to complete the report. You can also include a comment.